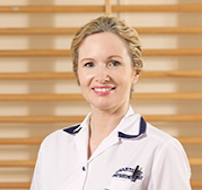 Sinead began working in St James’s Hospital in 2002. Sinead worked as a staff grade physiotherapist for two years before becoming a Senior in Medicine for the Elderly in 2004. Sinead became Clinical Specialist in Gerontology in 2013.

Sinead qualified with a BSc in Physiotherapy from UCD in 1998 and has previously worked in St Michael’s Hospital, Dun Laoghaire (1998-2000) and private practice in Sydney, Australia (2000-2002).

Sinead completed an MSc in Neurology and Gerontology in RCSI 2010. Sinead is currently completing a PhD (part time) with RCSI working on a project entitled ‘Progressive Resistance Strengthening in Older Rehabilitation Inpatients’. She is the Physiotherapy representative on Hospital Falls Steering Committee and is currently therapy Lead in National Clinical Programme for Older People. She has been a Specialist Member of ISCP since 2013.

Sheila joined SJH upon graduating from University College Dublin in 2001.

After working in several rotations across and within the department she progressed to Senior Physiotherapist in the area of Care for the Older Person in 2005.

Since then she has worked in the following areas:

Sheila’s current role is as Senior Physiotherapist in inpatient rehabilitation within the Mercer’s Institute of Successful Ageing; as well as providing an outpatient service for patients attending the Falls and Syncope Unit.

She completed her research MSc in 2011 in conjunction with the Royal College of Surgeons in Ireland (RCSI) with a focus on Outcomes post-Hip Fracture in Elderly patients.

More recently she completed ‘Injection Therapy for Therapist’s in Botulinum Toxin’ through Plymouth University, UK in 2016.

Forthcoming continuous professional development include a focus on vestibular rehabilitation.

Within the Irish Society of Charter Physiotherapists (ISCP), she is a member of the clinical interest group of Chartered Physiotherapist in Neurology and Gerontology. She has held previous roles in the group as the CPD coordinator (2004- 2006) and as Honorary Secretary (2007-2009). Currently she is actively involved with Physiotherapists of the Older Person. 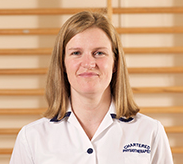 Helen began working in St. James’ Hospital in 2005 as a senior in general medical/neurology. Her role has evolved in recent years to focus on the area of acute stroke and she has led the establishment of a specialist acute stroke physiotherapy service.

Helen graduated from Queen Margaret University College, Edinburgh in 2001 and worked in other areas of Dublin as well as New Zealand before coming to St James’s Hospital. She is a specialist member of the Irish Society of Chartered Physiotherapists (SMISCP).

Helen completed a post-graduate diploma in neurological rehabilitation with the University of Western Australia in 2009. Following this she conducted a research masters with Trinity College Dublin in 2012, investigating the relationship between fatigue and the energy expenditure of gait following stroke. She has had many presentations at national and international conferences including the ISCP conference, UK stroke forum and WCPT congress.

She has been involved in several multi-disciplinary teams both within the hospital and in the community and is dedicated to furthering clinical excellence in the field of stroke. She has been a physiotherapy representative on the Irish Heart Foundation’s Council on Stroke since 2007 and contributed to the development of the National Stroke Guidelines and a national stroke education programme.

After graduating in 2008 Ruth worked for nine months in Our Lady’s Hospice Harold’s Cross, which specialises in Rheumatology, Gerontology and Palliative care.

Ruth then travelled overseas, spending one year in Melbourne Australia, and five years in Auckland New Zealand. Ruth completed her  basic grade rotations in a large tertiary teaching hospital, Middlemore Hospital, in Auckland and then spent one year working in the Royal Melbourne Hospital.

Ruth returned home to Dublin in September 2015, taking up a position in St James Physiotherapy Department
Ruth is the author of two post graduate papers in Auckland University last year. These papers were “Concepts of Rehabilitation”, and “Motor Control”.

Ruth has a keen interest in Neurological Rehabilitation, and is a member of the Neurology and Gerontology Special Interest Group of the ISCP.

Bronagh graduated from the University of Ulster in 1999. She has worked in SJH since 2008 as Senior Physiotherapist in the Robert Mayne Day Hospital – a multi-disciplinary unit providing outpatient rehabilitation for the older adult. Prior to St James’s Hospital Bronagh gained extensive rehabilitation experience in Ireland (National Rehabilitation Hospital, Dun Laoghaire), the NHS and New Zealand.

Bronagh’s interests include care of the older adult, neurology, falls and quality improvement. She has specialised training in the Bobath concept, the physiotherapy management of Parkinson Disease and Myofascial Release.

She has gained a certificate in Management Skills – Managing People (2011) and Lean Healthcare Management (2013) and is due to commence an MSc in Research Oct 2017. She is a member of the Irish Society of Chartered Physiotherapists (ISCP).